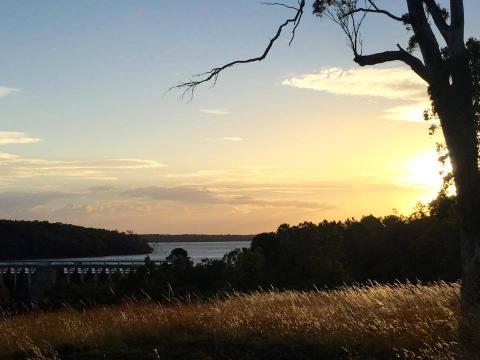 Hello 2017! I hope your Christmas was wonderful and not too jam packed to sit, relax and read a book which hopefully someone stashed in your Santa sack. I scooped the pool with a few great novels. Two crime books by David Baldacci (The John Puller series) and The Birdman’s Wife by Melissa Ashley – the story of artist Elizabeth Gould. (I would’ve bought this novel myself simply based on the stunning cover alone!)

To 2016, I will have to admit, I am glad to say goodbye. I know one shouldn’t blame a year in particular for the dastardly things that happened but I am human and as humans we tend to want to lay blame. So. When a friend explained to me that the tumultuous events of the past year could be explained by the cosmos being in upheaval due to the super moon, I went, ‘Hell yeah, I can go with that. It’s all the super moon’s fault!’

The past two years in fact, have been spent, on a personal level, lurching from one crisis to the next. But focusing on 2016, this year was taken up with writing a book as hard and fast as I could, along with the usual stuff a family experiences – highs, lows and the mundane - and with caring for my ailing great aunt. It was the latter which meant 2016 was a particularly intense time. My great aunt was an incredible woman, one whom I admired and loved very much. And despite being nearly half a century older than me, she was one of my best friends. Two Great Wars, the Depression, the change of numerous eras, she'd seen it all. Her stories were endless, her stoicism, courage and strength of spirit extraordinary. Along with some lovely cousins we worked hard to keep her in the home she adored for as long as we could and we managed it until near the end of the year.


As I said amidst all this I was trying to write LAKE HILL, and in some infinitesimal way this book has aligned itself with my great aunt. It’s been a battle all the way to look after my family, my aunt and write a cracking novel (the farm in its entirety was consigned to my poor husband for the duration), thus the reason publication of LAKE HILL was delayed from Christmas 2016 to Mother’s Day, 2017.

I am not super woman.

My, was that a shock to this little black duck.

So I put family first. And my agent and publishers understood, which was wonderful. You all understood which was even better, and why I am SO grateful to have such a wonderful bunch of gorgeous readers out there who patiently wait for my books.

On Wednesday, November 30, I had flown home for a shower and change of clothes, having spent the previous night at the hospital with my aunt. I bolted down a cup of tea, and before racing back to the hospital, pressed send on the edits for the manuscript of LAKE HILL. Five hours later my aunt left us too.

I miss her so much.

It's only now that I see the poignancy. Both things I had intensively worked with throughout the year of 2016 went on the same day. There’s got to be some symbolism in there.

So, I sit here today, going through the editing process on LAKE HILL once again, and have written this blog, so you know - despite the plot being absolutely nothing to do with my great aunt, behind LAKE HILL there is an incredible lady who supported my writing and me in the most loving way. She was so proud of my books, read every word (even BELLA’S RUN which did shock!) and to everyone from the gardener to the nurse on duty two days before she died she said, ‘This is my niece, she’s a famous author, you know. She’s written SO many lovely books’. I would always wish the floor would open and swallow me whole due to embarrassment, but now I would give anything to hear those words again.

LAKE HILL will be on a bookshelf near you by May 1, 2017, just in time for Mother’s Day. I hope you like the cover. The girl is a perfect depiction of our new heroine, Julia Gunn. You can read a more about Julia's and Rick's story on the Penguin / Random House website now.